“I don’t think anyone can be more of a predator than a human being.”~Robert Rodriguez

Last week our newspapers were awash with the tragic story of Jill Meagher.

A cautionary tale of being in a place you thought was safe, but it turning out not to be.

This morning I got up, took the kids to daycare and then came home to go for my jog. I altered my jogging course today. Made it a bit shorter, skipped the bush leg of the track and opted for a blocky in my neighbourhood. It was a glorious run that had me thinking that I lived in paradise. The weather was sublime and the air smelled delicious.

This afternoon my Facebook had multiple stories/warnings of a man who had approached two women (separately) walking their dogs at about 7pm on Monday night in that very same bush section I skipped this morning. Maybe I will be skipping that bush section more often.

It makes me angry. That one guy on Sydney road made a whole lot of people suddenly worry about the area. This one guy in a tracksuit on my jogging track has got me thinking about new places to run where there are lots more people. Really, the reason I (and probably a lot of other people) go there is because there aren’t cars and lots of other people. He is taking away my ability to feel safe. Making me think about getting a can of Mace to take jogging or something equally crazy.

I took these photos at 7pm tonight. One is of the east, and one of the west. It’s not even dark out.

It takes one predator to ruin something.

In any village, town or city. 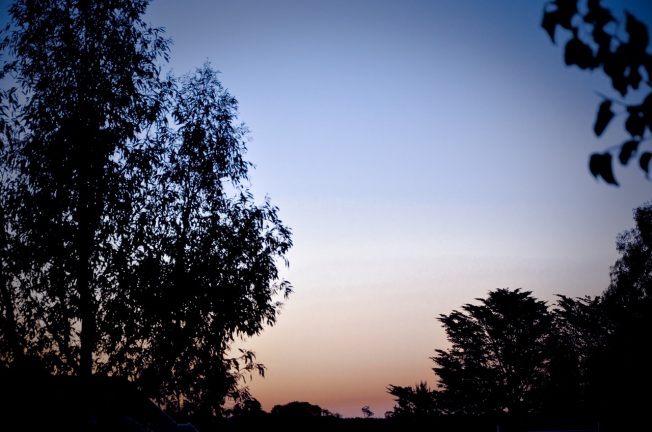 Recently from This Girl