I’m trying to get on top of my pruning early this year. Last year I left it late. Really late. I think some of the issues in my ornamental garden might be explained by late pruning (ahem, Bloodgrass).

So the raspberries have been chopped and I took the netting of my tomatoes so they could catch the last of the sun before we descend into pure winter gloom. There are still heaps of tomatoes on there, though.

My little capsicums are coming along although a lot of them are chilli shaped. Must be the variety I bought. I can’t remember really. I think one of the plants is from seed, hopefully it is a chocolate capsicum, there are a heap that I bought as seedlings after the failure of all my seed growing efforts, and then one plant (the one that has a normal looking capsicum on it) was a more advanced plant I got a few weeks ago when I thought my other plants weren’t ever going to increase in size or produce fruit.

My strawberries are fruiting again! How bizarre. This time the strawbs are marginally bigger. My children are still picking them and eating them in one swift motion.

I guess you could say all is good in the patch 🙂 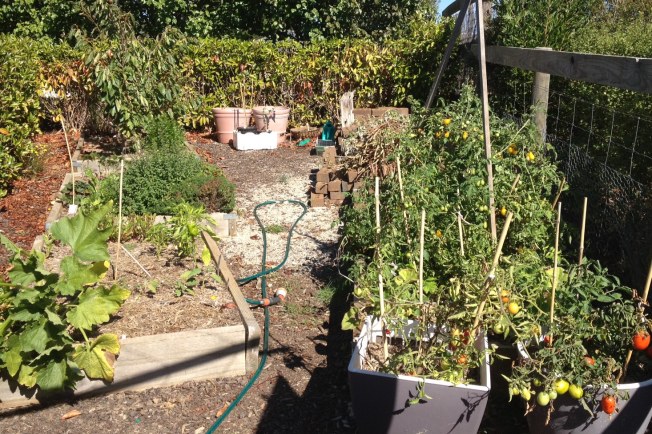 I’m a bit excited about my garden this week. All of the tomato plants have lots of tomatoes at various stages of development. I am going to have so many colourful tomatoes soon!!

I also noticed yesterday that there is a zucchini on one of the plants and there are several (tiny) pumpkins.

With a hot spell and an expected high of 48 degrees C forecast for here in the next ten days, I am focussing on adequate hydration and a possible shade cloth so the plants don’t fry.

Well, last week I was somewhat complaining that the berries were always eaten straight off the bush by my cheeky little ones and I was not getting any! This week I have about a kilo of currants and a decent amount of raspberries to enjoy!

There are little tomatoes on lots of my plants now. My son got a little bit excited and picked a couple of the mini roma when they were orange…..oh well. He was so proud and excited to show me. I showed him some pictures on the internet about what ripe tomatoes should look like. I didn’t bother mentioning to him that we actually will be having some yellow and green tomatoes. That would have just been confusing.

My capsicum plants aren’t doing much. They aren’t wilting dead, so I guess that is a good sign?

Have yourself a merry christmas!

Recently from This Girl